Humberto “Chief” Alvarez is one of the founding members of The Marlin Spikes.Chief provides the lead vocals for the band as well as his musical talents on the Guitar, Banjo, Mandolin, Tin Whistle and soon to be heard on the Fiddle and Anglo Concertina.

Humberto is known as “Chief” to all of us due to his Twenty-Two years of Honorable Naval Service in the United States Navy Submarine Force and his retirement rank of Chief Fire Control Technician Submarine Service FTC(SS). The love of music comes from his parent’s early purchase of a guitar, his mother’s beautiful voice and his personal desire to learn more instruments. We believe there is not an instrument he won’t try although the Anglo Concertina is providing many hours of frustration and headaches.

Chief also has a very interesting talent in Marlinspike Seamanship. As a member of the International Guild of Knot Tyers, Chief has knotted many nautical beauties, bottles, ship rails, ship bell ropes and much more. It is his love for Civil War naval history, knot tying and antebellum music that gave birth to The Marlin Spikes. 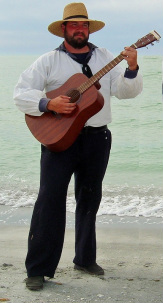 Kevin “Alvie” Alvarez is one of the founding members of The Marlin Spikes. Alvie provides the Bass tunes for the band as well as sharing his musical talents on the Guitar and Cello.

Kevin is known as “Alvie” to all of us due to his years of Honorable Naval Service in the United States Navy Aviation Community. As a Lieutenant in naval aviation he acquired several “Call Signs” but the only one we could use here was “ALVIE”. The lieutenant’s love of music comes from his parents and his personal desire to learn more about music. As a private aviator, he has come in contact with many in the music industry. His last picture was with Dave Mathews.

Adriana “ADRI” Alvarez is a member of the Marlin Spikes. She provides back-up vocals for the band as well as playing the recorder. Adriana is learning how to play the Piano and the Violin.

Adriana is known to us as “BooBoo” since she is the baby of the bunch. Adriana is the youngest member of the band. She is a quick study on the vocals and her love of music comes from her PaPa. Adriana is also a very talented book author. She has written four books thus far, The Dragon Men, The Diary of a Pig, A Civil War Day: The Diary of Sally Ann Jackson and The Ghost in the Classroom. All of them short children’s books and very interesting.

Adriana’s hobbies include: Writing stories, playing with her friends and pets, Civil War re-enactments and everything about Japan.

Luis "Luigi" Rioseco is one of the founding members of The Marlin Spikes. Luis provides the Percussion, MIDI sounds, Sound Engineering and Recordings for the band as well as sharing his musical talents on the Guitar, drums and Piano.

Luis is better known to us as “Luigi” due to his Lieutenant rank and years of Honorable Naval Service in the United States Navy Submarine and SeaBee Community. Although all this is true, he is really known to us as Luigi because of his unending desire to play video games. The lieutenant’s love of music started at a very young age and progressed through High school. It was in his middle school years that he met Barby and the rest is history.....

Luis’ hobbies include: Hunting, Building stuff, Music of course, Video Games, Engineering masterpiece after masterpiece and Video games (You can never get too much of them). 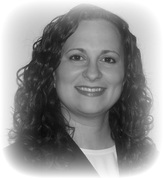 Barby is a member of The Marlin Spikes and is better known to us as “Martha” she has the most creative mind known to mankind. She not only focuses on our marketing and sales but is also the vocal genius behind all the wonderful tones coming from The Marlin Spikes. She is able to take any tune and find all the lows and highs and produce great harmony lines that others can follow.

Barby's hobbies include: Creating,……Creating...... and oh yes Creating. When she is not creating she is homeschooling, Feeding all the pets and creating an awesome PIZZA...... 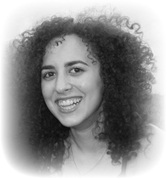 Ariana is a member of The Marlin Spikes and is better known to us as “Gaijin” she sleeps, eats, and breaths anything Japanese. Fluent in English, Spanish and Japanese she is the intellectual in the group. She is a very talented author and has penned a book to be released soon. Gaijin is the other vocal genius in the group, together with the harmony lines produced by Barby, this duo can do no wrong.

Ariana's hobbies include: Japanese...... Japanese......and oh yes Japanese. When she is not engaged in the very artful Japanese language she is marveling us with her beautiful paintings and sketches. She also is a bit of a "Martha" and an entrepreneur producing various jewelry lines.  Watch for her products......

Betty is a member of The Marlin Spikes and  better known to us as “DOC Betty Boop” when she is not being a backup singer for The Marlin Spikes she is busy running a very successful medical business. WE can always count on her for medical advice, band-aids, etc. DOC along with Martha and Gaijin create the most wonderful harmony you would lay ears on.

Doc Boop's hobbies include: Work..... Work...... and oh yes WORK..... She never stops.  She also enjoys being with her family and pets, loves to take cruises, enjoys camping in her RV, updating her Camping Blog at Out of Sight Adventures, has a love for music and stays away from anything that requires a paint brush.....by her own admission, she can't even paint stick figures.....